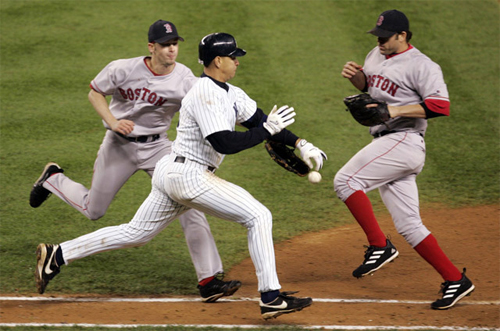 I was watching some sports channel last night which was airing some kind of “Best Baseball Moments” countdown. I caught the end of it, the montage part in which inspiring music plays in the background while the I’m Gonna Let You Finish But Joe Carter Had The Best Baseball Finish Of All Time show goes on and on. And as I was watching that montage I thought, man a lot of people think some of my worst baseball moments are the best. Looking at you, 1986 Mets.

And really, the ‘86 Mets winning the World Series and the whole Bill Buckner thing is only third on my list of worst baseball moments. Second would be when the Atlanta Braves traded Brett Butler. The first? October 20, 2004.

I just said that date out loud. My son was in the room and did that hand covering the ears thing. We’re not allowed to talk about 2004 around him. Mostly, he insists the baseball playoffs in that year never happened.  But they did. Oh, they did. And I will always look back upon that year as the one when the Yankees really broke my heart.

“Red Sox are three outs away from being swept out of the American League Championship Series for the first time since 1988” - Joe Buck at the start of the bottom of the ninth of game 4.

We were psyched. This was awesome. We were running the dreaded Sox into the ground. Humiliating them. Punishing them. Who’s your daddy now? This was GAME ON and we were loving it.

And then the pact Big Papi made with the devil kicked in and all hell broke loose.

The games came and went and suddenly we found ourselves in front of the TV watching a game seven that should never have been.

“The 1-0 pitch, swing and a groundball to second base, Pokey Reese has it, he throws to first and the Red Sox have won the American League Pennant.”

I’m telling you. I was stunned.

I remember back in whatever year that was that I saw Apocalypse Now in the movie theater. At the end of the movie, as the credits rolled, the theater was completely silent. Shock and awe. Everybody just sat there like, what the hell did we just see?

It was like that in my sister’s house. We all just sat there with our mouths hanging open. Nobody said anything for a long while. I think we were post traumatic.

I went through stages of denial. I lingered on anger. Maybe I threw a couple of things. Maybe I broke a few Yankee bobbleheads in the middle of the street by running them over with my car. Maybe I looked up Curt Schilling’s phone number and told him I would take that damn bloody sock and shove it so far down his throat he’d be shitting cotton and blood for two weeks. Maybe I went home and stared at my photo of Bucky Dent hitting that homer over the Green Monster and cried into my pillow.

Let it be known, I wasn’t really crying because the Yankees lost. I mean, it’s sports. It isn’t my life.

I was crying because they lost to the Red Sox.

And now I’d have to face every Red Sox fan I brazenly taunted after game three, when I thought there was no way in hell the Yanks would lose this series.

Chickens coming home to roost and all.

I’d like to say I learned a valuable lesson in sports humility that day.

But…eh. I just learned how to be really bitter.