Death in the NHL 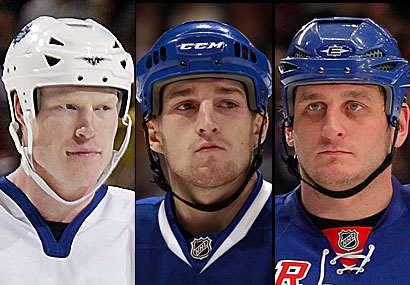 The death of former NHLer Wade Belak might have gone widely unnoticed by most news outlets if not for that the fact that Belak was the third hockey player - all of them considered enforcers - to die during this off season.

Belak, who played for five teams in his NHL career, was found dead last Wednesday. His death was ruled a suicide.

On August 15, Vancouver Canuck Rick Rypien, who had been battling depression for more than ten years, committed suicide.

On May 13 Derek Bogard, who played for the Minnesota Wild and New York Rangers, was found dead due to a lethal combination of alcohol and oxycodone.

Boogard’s last NHL game was in December 2010. He suffered a concussion during a fight in that game and never recovered enough to play again.

Rypien suffered a series of injuries in his career, missing so many games at one point that his frustration led him to take a leave of absence from the Canucks in 2009. In 2010 he took another leave of absence, citing personal reasons.

The sudden deaths of three NHL veterans has made the NHL take a hard look their existing mental health programs and has made many people question if the league provides enough assistance to its players, especially those who have suffered repeated head injuries over the course of their career. That these three men were all fighters is not something that should be regarded as coincidence.

“While the circumstances of each case are unique, these tragic events cannot be ignored. We are committed to examining, in detail, the factors that may have contributed to these events, and to determining whether concrete steps can be taken to enhance player welfare and minimize the likelihood of such events taking place. Our organizations are committed to a thorough evaluation of our existing assistance programs and practices and will make immediate modifications and improvements to the extent they are deemed warranted.”

Here’s hoping the league makes every effort to connect the dots between the deaths of Belak, Boogard and Rypien. Injuries, concussions and career frustration are all things that can lead to deterioration of mental health, especially when someone is already suffering from depression. The NHL needs to take a closer look at not only how the injuries inherent in playing a contact sport impacts a player’s health, but how not playing the game impacts a player’s mental health.