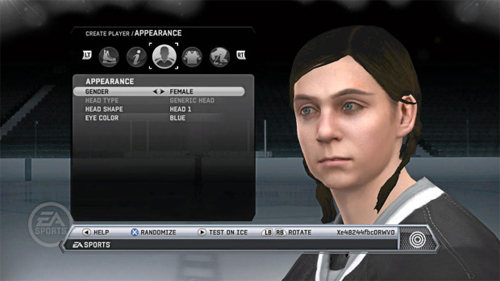 14-year-old Lexi Peters wanted to play as a girl character in the EA Sports NHL games. But no female characters customizations were available.

“I asked my dad, ‘Why aren’t there girls in the NHL video game?’ And he said, ‘I don’t know, write a letter.’ So, I did,” Lexi told the Globe and Mail from her home in Buffalo, N.Y.

She sent a typewritten letter to the executives of one the largest video game makers in the world, asking them to add women players.

She wrote: “It is unfair to women and girl hockey players around the world, many of them who play and enjoy your game. I have created a character of myself, except I have to be represented by a male and that’s not fun.”

The president of EA Sports forwarded the letter to the producer of the games, David Littman, who then got permission from the NHL to build a female character into the game.

Then EA Sports gave Lexi the news. Not only were they adding a female character option, but they wanted Lexi to play the part of the “default” female player that gamers would then be able to customize.

“I was so excited,” says Lexi. “My dad called my grandpa immediately, who called my Uncle Chris, like a chain reaction.”

“It’s a big change and it’s exciting to see, because so many girls pay hockey now,” said Manon Rhéaume, the only woman to ever play in the real-world NHL.

I’ll pick up NHL 12 tomorrow on my way home from work and later in the evening settle down for my annual ass-kicking at the hands of my son (I usually play the game once before I surrender it to him - I haven’t been good at a hockey video game since NHL ‘94). But at least this time I get to play as a girl.