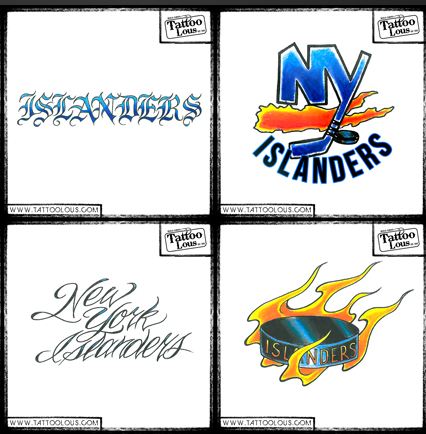 I had a rather heated conversation on twitter a few days ago with someone who was upset that the New York Islanders now have an Official Tattoo Parlor. That’s right, a tattoo parlor - Tattoo Lou’s - is now a sponsor of an NHL team and they will set up a booth right inside the Nassau Coliseum.

The guy I had this conversation with (I don’t know him personally) was livid about the whole tattoo thing. He’s no longer taking his young daughters to Islander games. Because with the addition of a tattoo sponsor, he says Isles games are no longer family friendly.

The gist of my questions to him went like this: So, the beer ads, the bar sponsorships, the Ice Girls shaking their asses, the t-shirt throwing young women with their in-your-face cleavage and the fighting on the ice and in the stands were all fine family friendly entertainment until they had the nerve to add a tattoo shop to the lobby?

Apparently, yes. All of the other stuff was fine, but it’s the tattoos that are going to send the wrong message to his daughters. So he’s boycotting the Islander games this year. And I’m sure he’s writing a strongly worded letter to the team to let him know they have lost a valued customer because of their silly insistence on doing something new to get the average consumer of Islanders hockey - that being a male in his late 20s and not ten year old girls - to spend more money at the Coliseum. I’m sure they will take his complaint to heart.

Sports arenas and stadiums have come a long way from the days when you’d get to the game, buy a hot dog, watch the game and leave. They are entertainment complexes now. The food courts alone are destinations where you could spend an entire day sampling foods from sushi to pulled pork to deep fried anything. There are picnic areas, interactive entertainment, a hundred things to do besides watch the game.

Is having a tattoo booth in the lobby of an arena any different or worse than having a full service bar in the lobby? Can you fault the team for trying to do something new or innovative to draw the fans in? Sure, they’re not drawing them into the game itself but once you’ve paid for their ticket management is less concerned about you actually watching the event than spending money at their concessions. For all they care, you could watch one inning of a baseball game and spend the others forking over cash to eat tacos, have your picture taken with a mascot, buying souvenirs or go on rides. The game is almost incidental to your stadium experience in the eyes of marketing executives.

That’s not say I think addition of a tattoo booth to the Nassau Coliseum is the greatest idea in the world. I have nothing against tattoos - my daughter and boyfriend combined have more ink than the Sunday New York Times - but I do have something about the Islanders suddenly coming up with ideas to add more fun and excitement to game nights when they’re just going to be leaving us in a couple of years. It’s like your girlfriend getting a boob job right before she dumps you.

Ok, maybe a bad boob job. Because the Islander flash you can choose from is pretty damn hokey. I’m surprised you can’t choose a piece that has the words to Billy Joel’s “Downeaster Alexa” scrawled over the old fishsticks logo.

Maybe the guy I was talking to on twitter is right. Maybe the tattoo thing is a bad idea. Lord knows there are enough young people walking around Long Island with regrettable tattoos. It’s sad to imagine a future Long Island where hundreds of hockey fans are walking around with flaming puck tattoos honoring a team that doesn’t even exist anymore. Tattoos are permanent. Sports teams are not.

I’m going to skip past the tattoo booth opening night as I make my way to the sushi bar between periods. Not because I don’t like it. I’m just holding out on the tattoo thing until they open a booth at Yankee Stadium. Because I know they’ll never leave me.